Fight at Piedmont Park in Atlanta causes people to 'stampede' 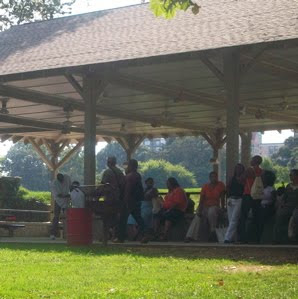 The Atlanta Police Department said people with guns were fighting in Piedmont Park at about 9 p.m. today causing hundreds of people to "stampede."


There were no initial reports of injuries and police said the scene was deemed safe after the crowd was dispersed. The park closes at 11 p.m. and most people were leaving the park at about 9:30 p.m.

"The APD got a call about an unruly crowd at the park and responded to the scene. There were two Code 20s [use of mace] and several arrests were made, but it's not known yet how many," Harris said at about 10:15 p.m. "The crowd is dispersed and the scene is secure." She added there were no reports of any injuries.


Ryan Lee, editor of David Atlanta magazine and senior reporter at Southern Voice, who was at the park tonight when the incident took place, said he heard no gunfire and police told him a fight broke out among a group of people who had guns. He said at about 9:30 p.m. the APD was attempting to clear out the park.


"There were people fighting with guns and that caused people to stampede," an APD officer told Lee at about 9:30 p.m. at the scene.


Earlier today, the park was filled with people dancing to music and picnicking as well as walking throughout the park.


"I like this crowd — I like coming to Pride because you can meet a lot of people from all around and you are able to be yourself," said Tee, 34, of Detroit, Mich., who was attending her first Black Gay Pride.


"I've been hearing about this party in the park for years. I've always heard this is the spot to be during Pride," she said.
Brought To You By KingNmiami

negroes just can ever behave! its a damn shame!

Defeats the point of pride.