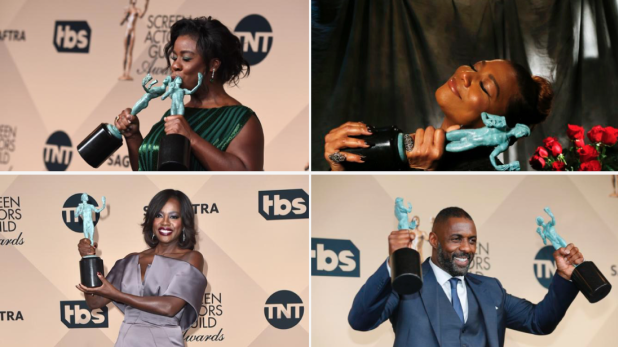 It was a big night for diversity in Hollywood!
The 22nd Annual SAG Awards took place at the Los Angeles Shrine Auditorium where many of our faves took home major awards.
“Ladies and gentleman, welcome to diverse TV,” Idris Elba said as he appeared beside his young Beasts of No Nation co-star Abraham Attah to introduce a clip from the film about child soldiers in an African civil war.
Idris took home not one, but TWO SAG awards this evening  — one for his role in ‘Luther’ and the other for ‘Beasts of No Nation.’ Uzo Aduba also earned two SAG Awards this evening for ‘Orange Is the New Black.’
Queen Latifah earned a SAG award for ‘Bessie’ and Viola Davis won for ‘How to Get Away with Murder.’

Also Queen Latifah had this to say when she won "I hope that anyone out there who does not come in the package that people say you should,keep fighting for it," Flip those rocks. Keep pushing, keep turning, you can do it. You build your own boxes, not people. So knock that thing away and do you!" and Viola Davis when asked about diversity winning this evening at the SAG Awards she said ""We've become a society of trending topics. Diversity is not a trending topic."
Brought To You By Andresflava