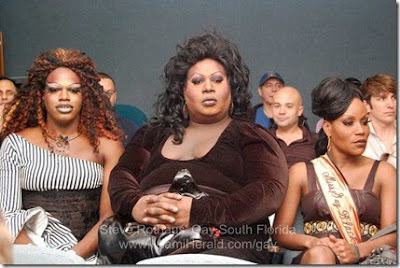 The audience at Tuesday's Miami Beach planning board meeting was better coiffed than usual.

Dressed to the nines, four drag queen performers -- backed by dozens of vocal gay Beach residents -- came to City Hall asking that they be allowed to continue entertaining at the Palace restaurant's weekly Sunday brunch.

The queens' brunch on Ocean Drive prompted a royal row recently when guests at the Palace's next-door-neighbor, The Tides South Beach hotel, complained about the noise.

The Tides, at 12th Street and Ocean Drive, wanted the Sunday shows stopped.

Performances are indoors but crowds often spill onto the sidewalk. Palace management said it will keep crowds away from people dining outside the Tides.

The board told the Palace and Tides managements to work out their differences and return in two months.

"As always, our intent is to work together with The Palace Bar to find a mutually acceptable solution for the enjoyment of all of our guests," Tides general manager Shan Kanagasingham said in a statement.

"We have a lot of people who benefit from these shows," said Tiffany Fantasia (a k a Henry Williams). About two years ago, a customer told her: " `Oh my goodness, I had so much fun. My husband passed away four months ago and that was the first time I had fun since that happened.' That was day it dawned on me how much impact we have on people's lives."
Brought To You By KingNmiami