Hair stylist says he was fired from campus salon for 'flamboyance' 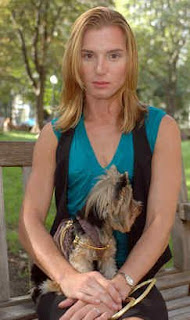 Danny Brant, a 25-year-old gay man who dresses in women's clothing, never faced discrimination for his clothing choice when he worked in real estate or at his old hairstylist jobs in the Philadelphia suburbs.

But Brant, a native of Philadelphia, said that about three months after he landed a job at the Chop Shop hair salon on Temple University's main campus, management of the salon began discriminating against him for his clothes.

"You would think, out of all those places [I've worked], if it was ever gonna have a problem, it would have been there, not at a place on a college campus," he said yesterday.

On July 30, Brant filed a federal discrimination suit seeking unspecified damages in the form of back pay and compensation for the emotional distress he claims was caused by the Chop Shop.

In the suit, Brant alleges that Chop Shop owner Kathy Thomas cut his hours and stopped sending male clients to him about three months into his employment there, in June 2007, claiming that he was "too flamboyant."

Brant also said Thomas had him sent home from work for wearing high heels or women's shorts and that, ultimately, he was transferred to the Chop Shop's South Street location and allowed to work only one day a week before he was fired.

Brant said Thomas has told various media outlets that he was fired for referring a salon patron looking for waxing hair removal elsewhere, because the Chop Shop on South Street did not offer that service - a common practice at the salon, he said. He said that another employee told him when his hours were cut that Thomas wanted to "phase him out."

"I wear women's clothing because I feel more comfortable in it," Brant said.

"This claim has to do with gender stereotyping," Brant's lawyer, Susan Wexler explained. "As far as we know, there is no dress code at the Chop Shop."

Brant, who recalled wearing a women's polo shirt, women's flare jeans, a fur-hooded sweatshirt and women's wedge shoes when he interviewed for the job, said he was never informed of any dress code at the salon and described employees' dress as "casual."

He said losing his job at the Chop Shop, where he worked full time at one point, caused a devastating loss of income for his family - including the man he describes as his husband, Robert, and their two dogs, Holly Golightly and Elizabeth Taylor - and forced them to "downsize their cost of living tremendously."

"How do you put a price on your self-worth and mental well-being? It's priceless," he said. "It's like if your boss told you to grow three inches by tomorrow or don't come back to work. She was asking me to be something I wasn't."
Brought To You By KingNmiami

i'm glad to have visited your blog and good to know you! I find it interesting and informative